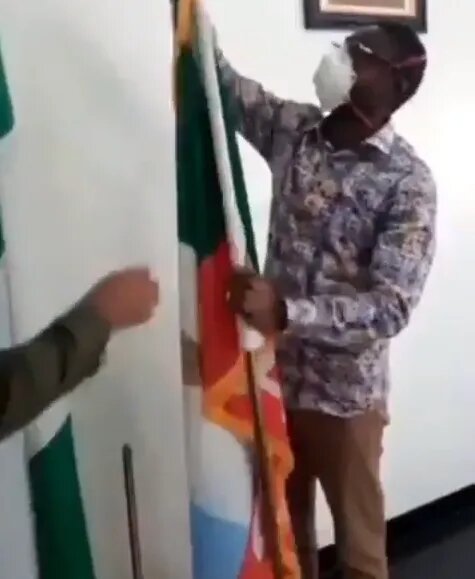 Edo State’s Deputy Governor Philip Shuaibu has today also resigned his membership from the All Progressive Congress, he could be seeing in video that’s been trending online removing the APC flag in his office.

This is coming after his running mate Gov. Godwin Obaseki also announced his resignation as an APC  member, in the video one of the persons present a t the time of the Flag removal could be heard saying “goodbye APC from Edo state Government house” as Mr Philip Shuaibu declared for the People’s Democratic Party (PDP).

He also announced his resignation from the All Progressives Congress (APC). Shuaibu told journalists;

“It is with pain that I am leaving the APC I helped to build. It’s very unfortunate that we have to resign from the party we all laboured for.

Obaseki has been in a running battle with his predecessor and current National Chairman of the APC, Adams Oshiomhole. His hope of seeking re-election on the platform of the party was dashed last week after he was disqualified from participating in Edo APC’s governorship primaries slated for June 22, 2020.