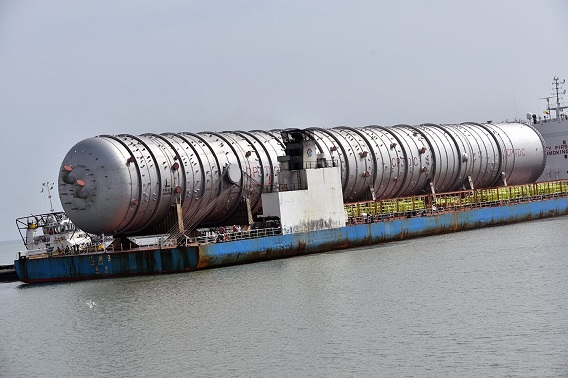 As a means of ensuring the widespread availability of petroleum products; Dangote Refinery has taken stock of the world’s largest crude distillation column equipment; designed for crude oil processing in Lagos on Monday, December 2.

Equally important, the equipment is the largest in terms of distilling capacity which is 650,000 barrels per stream day.

The Head, Maritime and Ports Infrastructure of Dangote, Capt. Rajen Sachar revealed to the press that the equipment is the biggest single-train facility used for refining crude oil.

He added that the crude distillation column works on the principle of fractional distillation; leading to separation of various components in the mixture on the basis of their different boiling points.

The refinery, when completed, would produce Euro-V quality gasoline and diesel; as well as jet fuel and polypropylene.

He said that the equipment was capable of refining 650,000 barrel per day (bpd); while the refinery was designed to be Africa’s largest; with potential to transform Nigeria from an importer of fuel to a net exporter.

He added that the technology is significant to Nigeria and Dangote refinery because “this is the largest crude oil processor in the world.”

“Dangote refinery also invested heavily in dredging the sea; from the refinery to Apapa for the easy passage of the vessel,” he added.

He said the President of the company, Aliko Dangote, was passionate about technology transfer to Nigerians; adding that he has given standing instruction to train seven Nigerians to be a ship captain.

Sachar said Dangote Oil Refinery Company is currently training about 150 young Nigerian engineers in refinery operations; in preparation for the take-off of its Lagos refinery and petrochemical plant in India.