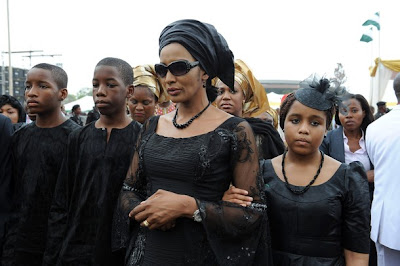 The  silent war between Ambassador Bianca Ojukwu, widow of the late Ikemba Nnewi, Dim Chukwuemeka Odumegwu Ojukwu, and Directors of Ojukwu Transport Limited, OTL, who are brothers of her late spouse, has blown open as both parties have dragged themselves before High Courts of Lagos state to determine who controls the landed property belonging to the company.

This came even as the family had concluded plans to mark the first anniversary of Ojukwu’s death at Nnewi today. The former Biafran warlord died on November 26, 2011 at a Londonhospital at the age of 78.

Crisis had been brewing between Mrs. Ojukwu and her late husband’s brothers over the control of some property which were left by their late father, Eze Odumegwu Ojukwu, under his company’s name, OTL, for decades. The late Ikemba Nnewi was one of the directors of the company and apart from living in one of the property at Ikoyi which he vacated and relocated toEnuguover 10 years ago, Ojukwu was also involved in managing some of the property.

These property which were at a time compulsorily acquired by the Federal Government were later released to OTL and the late Dim Ojukwu continued to manage some of them until his demise last year.

The property in contention

However, in a suit number LD/1539/12 filed at the Lagos High Court on October 9, 2012, Mrs. Bianca Ojukwu’s two sons, Afemefuna and Nwachukwu Ojukwu, claimed that they were entitled to the possession of the property known as 29, Oyinka Abayomi Street formerly 29, Queens Drive, Ikoyi, Lagos “until the harmonization of the management and administration of the assets of the 1st Defendant (OTL).”

Mrs. Ojukwu, who sued on behalf her two sons, further sought an order of the court to restrain the defendants or their agents from interfering with the “Claimants’ possession and control of 29, Oyinka Abayomi Street (formerly Queens Drive) Ikoyi, Lagos” as well as the aforementioned four property also situated in Lagos.

But in a twist, the OTL filed a fresh suit number LD/1680/2012 on November 1, 2012 also before a Lagos High Court against Mrs. Ojukwu, claiming possession of the property known as 29, Queens Drive, Ikoyi, Lagos which comprised two-storey detached house in addition to the payment of N40 million being expected rentable value per annum of the said premises from September 27, 2012, until the defendant gives up possession of the property.

In addition, the OTL demanded the payment of N100 million as damages from Mrs. Ojukwu as well as 21 per cent interest on the accrued sum until judgment was given and five per cent until the entire sum was fully liquidated.
In a 15-paragraph statement of claim brought by its counsel, Ifeanyi Okumah, OTL claimed ownership of the property at 29, Queens Drive, Ikoyi, Lagos, explaining that its agent appointed managing agent had asked Mrs. Ojukwu to handover physical possession of the property to him but she refused.

The company said despite disclaimers published in some national dailies warning the general public to deal with the managing agent appointed by it, Mr. Massey Udegbe and subsequent letters to the occupiers of the property to vacate and hand over the keys to the owner (OTL) or its agent, the defendant (Bianca) refused to hand over the property, a development that has denied the company N40 million rent it would have collected on the said property.

Following the two legal actions, some tenants of the said property were thrown into confusion as to who to pay their rents and this prompted one of the occupants of 30, Gerrard Road, Ikoyi, Lagos, West Africa Offshore Limited to drag Mr. Emmanuel Omuojine, the managing agent appointed by the late Ojukwu, Mr. Massey Udegbe, who was appointed managing agent by OTL and the company (OTL) itself before the Lagos High court.

The company which claimed to have paid N40 million to Mr. Omuojine on behalf of OTL as five-year tenancy in 2007, sought an order of the court directing the payment of N24 million representing two years rent from March 16, 2012 to March 15, 2014 in respect of the said property and for same to be lodged into an interest yielding account in the name of the Chief Registrar of the High Court pending the resolution of the disputes between the parties.

By the new development, both Mrs. Ojukwu and the directors of OTL, would have to wait for the determination of the various suits on the contentious property before they could further benefit from them.

Meanwhile, the first anniversary is expected to be observed at Ojukwu’s family compound at Nnewi today though the family members are at loggerheads over who controls the property left behind by their late multi-millionaire father, Sir Louis Philip Odumegwu Ojukwu who died in 1966.