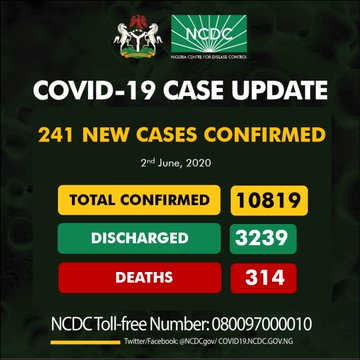 The Nigeria Centre for Disease Control (NCDC) on Tuesday; said it has recorded 241 new cases of COVID-19 outbreak in the country.

Equally important, the 241 new cases take the total number of infections in Nigeria to 10,818.

Specifically, the NCDC disclosed via its verified handle on the microblogging site, Twitter. It stated that as at June 2, 2020, 15 deaths were recorded in the country. However, the health agency noted that most of those who died were associated with co-morbidities; adding that three out of four of those who have been discharged were without co-morbidities.

Further, it revealed this was consistent with the fact that risks were higher for those with other illnesses; such as hypertension, diabetes and other chronic non-communicable diseases.

The NCDC said that there was general reduction in mortality trend and continuous improvement in recoveries; as shown in discharges compared to the increase in number of confirmed cases of COVID-19.

Equally important, it stated that no new state had reported a case of COVID-19 in the last 24 hours.

According to the NCDC, till date, 10,819 cases have been confirmed. However, it revealed that active cases stood at 7,266. In addition, 3,239 cases have been treated and discharged; while 314 deaths have been recorded in 35 states and Abuja, the Federal Capital Territory.

Further, the health agency reassured that it would keep Nigerians informed on the public health response to COVID-19; through the daily situation report. It noted that it was important for Nigerians to remember that there were humans behind the numbers.

Five months later, the disease continues to affect people in countries across the globe.

Please refer to table below for confirmed cases of COVID-19 per state in Nigeria.

COVID-19: Why churches, mosques in Lagos will remain closed