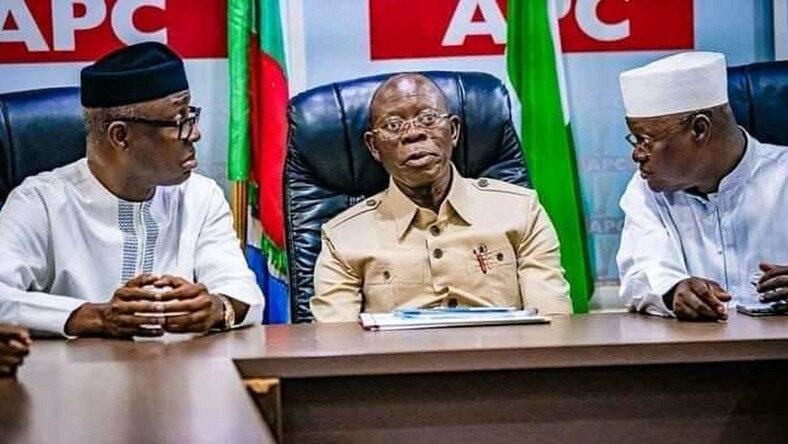 The Federal High Court, Abuja, has adjourned until June 29, hearing in a preliminary objection filed by Mr Adams Oshiomhole challenging the court’s jurisdiction to entertain the fundamental rights enforcement suit he instituted against the Edo government.

Justice Ahmed Mohammed on Wednesday, June 17, adjourned the matter after taking arguments from parties in the suit.

It was reported that a judicial committee of inquiry set up by Gov. Godwin Obaseki of Edo, to investigate the construction of the Edo Specialist Hospital; indicted Oshiomhole for alleged breach of the public procurement act.

The Justice James Oyomire-led committee recommended the arrest and prosecution of Oshiomhole.

The former governor, who was also recently suspended as the national chairman of the All Progressives Congress (APC), thereafter, sought an ex-parte order from the court to stop his arrest and prosecution on account of the indictment by the investigative panel.

Justice Mohammed had, on June 1, ruled that the state government stayed the action pending the determination of the matter.

Oshiomhole named the Attorney-General and Commissioner for Justice, Justice Oyomire, Inspector-General of Police, and the Department of State Services as respondents in the suit.

At the resumed sitting on Wednesday, counsel to the defendants told the court that since they had just been served the court’s processes by the applicant; they pleaded for time to study the documents and respond and sought for adjournment.

The judge then adjourned hearing until June 29.

Meanwhile, Edo Governor Godwin Obaseki on Wednesday, June 17, revealed that he has not joined another party following his resignation from the All Progressives Congress (APC) on Tuesday.

The governor made this assertion via a tweet, “I have not moved to a new platform yet to seek re-election.”

Obaseki said he was focused on the fight against COVID-19 pandemic in Edo and not the choice of another platform.

According to him: “My focus now is to control the spread of the coronavirus pandemic; which is ravaging our country and threatening our healthcare system. Stay safe.”

The APC screening panel disqualified the Governor from participating in the primary election slated for June 22.

Obaseki, on Tuesday, announced his resignation from his party; the All Progressive Congress (APC) following his disqualification from the primary election of the party over ‘defective certificates’.