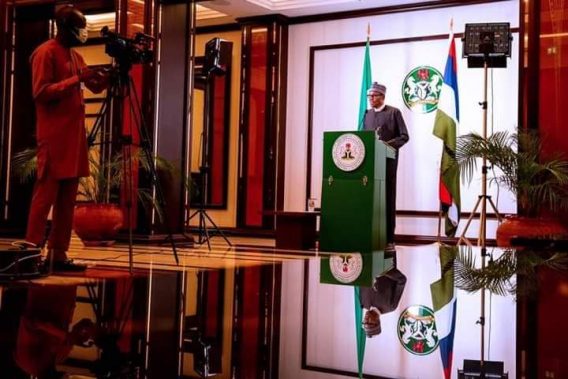 President Muhammadu Buhari has signed the proclamation order on the new measures he announced to curtail the spread of COVID-19 in the country.

According to a two-paragraph statement by his Special Adviser on Media and Publicity, Femi Adesina; the President signed the order shortly after his nationwide broadcast on Monday.

He had announced the new measures which take effect from Monday in the broadcast.

Adesina’s statement read, “President Muhammadu Buhari Monday; signed the Proclamation Order on the General Management; of Covid-19 in Lagos, Ogun, Kano, the Federal Capital Territory and other states in Nigeria; as contained in his national broadcast, April 27, 2020.

“This was in the exercise of the powers conferred on him by Section 3 of the Quarantine Act; CAP Q2 Laws of the Federation 2004 and all powers enabling him in that behalf.”

President Buhari had highlighted the new nationwide measures in place; which include selected businesses and also offices; allowed to operate within the hours of 9am and 6pm.

Others are; “An overnight curfew from 8pm to 6am. This means prohibition of all movements during this period except essential services.

In the meantime, the lockdown in the FCT, Lagos and Ogun States shall subsist remain in place until the new measures come into effect on Monday, 4th May 2020 at 9am.

Tinubu: Concerns as aide dies of COVID-19, another tests positive