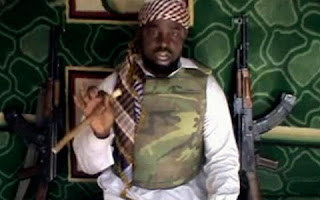 Boko Haram leader Abubakar Shekau delivered a video speech in Arabic posted November 29, on jihadist websites. In it, he associates the United States, Britain, Nigeria, “and other crusaders” with Israeli oppression. Shekau salutes fighters for

“the Islamic state in Mali,” Somalia, Libya, Afghanistan, Iraq, Pakistan, Yemen, and Palestine. Unless the Nigerian police repent, they will be killed: “Allah the Glorious and Almighty made your blood permissible to us, because you worship the laws of the government and not the laws of Allah the Almighty. Democracy is also a disbelieving system, O Obama, O Jonathan…”

It is not clear when or where the video was made.

Shekau has made anti-American statements before, though it has not been a major theme in his rhetoric. One previous statement linking Boko Haram to global jihadism was released soon after Shekau took over the reins of Mohammed Yusuf’s disciples and the group re-emerged on the Nigerian stage.

According to Reuters he said in July 2010, “infidels, hypocrites and apostates: Do not think jihad is over. Rather jihad has just begun. O America, die with your fury!”

What may be new in this latest statement is a focus on Mali. While there are many possible hypotheses, one is that Shekau is reaching out to the radical Islamic leadership in northern Mali as the Economic Community of West African States (ECOWAS) prepares for possible intervention under U.N. auspices. If Shekau is broadening his focus beyond Nigeria, individuals, institutions, or interests associated with the United States in Nigeria, or elsewhere in the Sahel, could become targets.