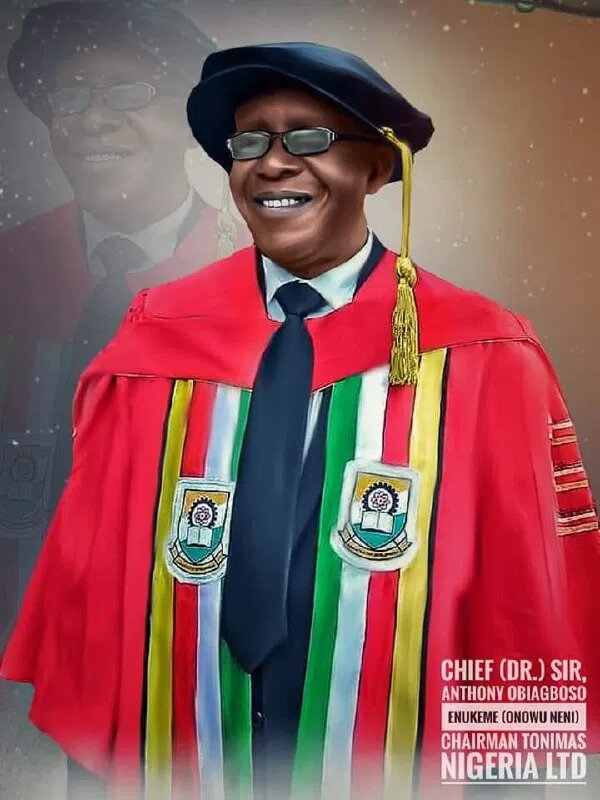 Nigerian billionaire and the Founder and Chairman, Tonimas Oil and Gas, Chief Dr. Sir Anthony Obiagboso Enukeme has breathed his last aged 76.
This was confirmed by the National Chairman of All Progressive Grand Alliance (APGA), Ozonkpu Dr. Victor Ike Oye in a press statement released today 9th June.
The businessman was said to have given up the ghost yesterday, the cause of his death, however, not contained in the statement.
Mourning him, Oye noted that Sir Anthony was a great lover of the party and that the party has, no doubt lost a rare gem.

“APGA HAS LOST A RARE GEM: ONOWU ANTHONY ENUKEME (TONIMAS)
The news hit me like a ballistic missile. I was dazed, shocked, and thrown into a mental fixation. How can he die like that? I queried. But no answer coming from anywhere. As I wrote this short tribute my hand was trembling. Tonimas dead? I keep asking. It can’t be. My head swirling and my heart beating in quick succession.”

“A good man has joined the Saints. Since I met him it has been one good act or another recorded for him. He single-handed built a church in his hometown, Neni; celebrated annual yam festival for his people, and gave generously to numerous church and philanthropic causes. He loved APGA with passion. He attended our last National Convention in Awka where he was elected a BOT member. Oh, Lord, my God! How do we bear this burden of the loss of one of our pillars? I can’t continue. I am losing balance. Let me wait till the reality sinks before I can do a more befitting tribute“, he wrote.