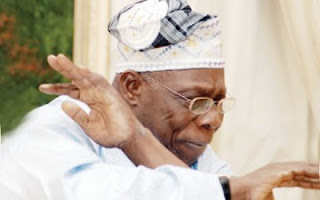 A civil society organisation, Alliance for Change, has asked former President Olusegun Obasanjo to apologise to the people of Odi over the massacre of indigenes of the Bayelsa community in 1999.
It also urged President Goodluck Jonathan to strengthen the nation’s security agencies in order to unmask Boko Haram sponsors and stressed that the country must not engage in “extra judicial killings in the guise of ridding Nigeria of Boko Haram fundamentalists.”
Faulting the deployment of soldiers in the Ijaw community by Obasanjo, the group maintained that Obasanjo must apologise to the Odi people in particular and Nigerians in general.
The group also faulted the recommendation of Odi military treatment for curbing Boko Haram insurgency, stressing that military invasion of Odi was not the solution to militancy in the Niger Delta.
Coordinator of the group, Mr Oyegoke Atitebi, and secretary, Mr. John Adaramodu, said in a statement, on Sunday in Osogbo that it was “unfortunate that thousands of lives were needlessly lost in the Odi massacre.”
Recalling that Obasanjo did not apply the Odi treatment to the outbreak of religious riots in northern parts of the country during the advent of Sharia, the group said Obasanjo had no moral right to complain about militancy in the country.
The statement said, “It appeared curious that a man, who looked the other way while non Moslems were being slaughtered in the North, and he described the situation as a phenomenon that would pass away, had suddenly found his voice.
“The Odi massacre was a clear case of genocide which portrayed Nigeria in bad light before the international community and for which the former President should be sober rather than urge President Jonathan to do same in other parts of Nigeria.
“We do not want to believe that Chief Olusegun Obasanjo as Nigerian president did that because the people involved were from the ethnic group just as he ceded out Bakassi to neighbouring Cameroon without considering the feelings of the minority.”
SOURCE nigerianeye.com
Tags
Obasanjo