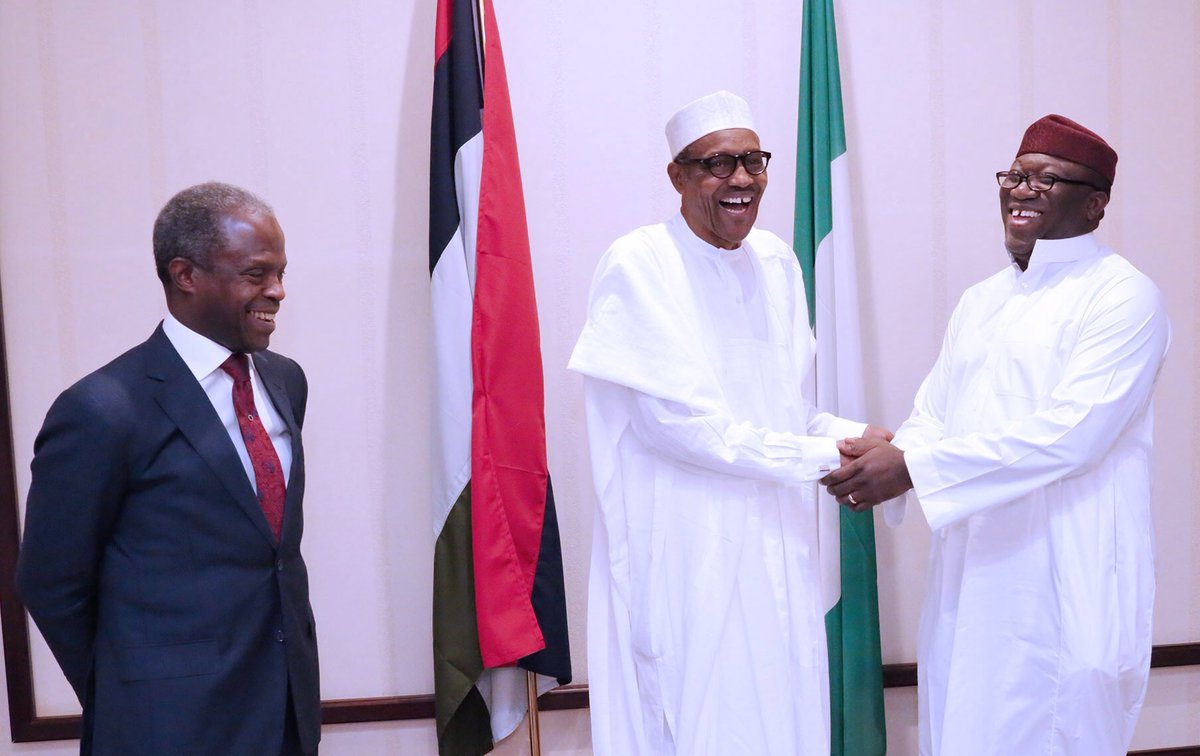 Some leaders of the All Progressives Congress, APC, in the United States, US, have alleged that cabals in the presidency are attempting to use a Governor from the South West to depose Yemi Osinbajo as Vice President.

They claimed that the cabals are using Fayemi to thwart moves towards ensuring that a competent “Yoruba man” succeeds President Muhammadu Buhari in 2023.

Reacting to some of the news making the rounds, they insisted that the major achievements of President Muhammadu Buhari’s administration would have been impossible without the Vice President.

A renowned judge in the United States, US, and leader of the APC, Dele Alade, said politicians should leave the President and his Vice out of their games, so they can focus on governance.

He said: “Any humiliation of the VP or Asiwaju Tinubu or other leaders will not be acceptable. All these shenanigans are because of 2023.

“Kayode Fayemi has to be very careful. VP Osinbajo has done a great job. We know it. Nigerians know it. Rather than helping Buhari/Osinbajo concentrate on delivering better governance to our people, some crazy elements and enemies of progress are bent on destroying the gains made so far and paralyzing governance.

“Tens of millions of Nigerians are suffering because of this. Only those lazy government officials who live on government and/or on government welfare (and not on their ingenuity) are unconcerned. We’re watching and we will hold them accountable.”

Another chieftain of APC said: “What a proverbial “Hammer throwing at the head.” This cabal is a basket case, a prodigal son.

“Thanks for exposing the scum bag, a fraud. No wonder the Cabals are using him to depose VP Osinbajo, so rather than having a competent Yoruba man as the next President, the coup plotters are already entrenched in diversionary and overt shenanigans with the help of the likes of Fayemi.”

Also, a leader of the party in the US, Baba Adam, said the contributions of the Vice President should be applauded.

Adam, who was a former US leader of Pro National Conference Organisations, PRONACO said: “This is just a reminder that the clock cannot be turned back. The very best of this administration’s initiatives be it Homegrown School Feeding Program, N-Power, GEEP Programs, Niger-Delta Peace initiatives, Energizing Education and Market Initiatives, etc came out of the Office of the Vice President and not at the President’s Office or the Ministries, Department and Agencies.”

The Borno state citizen who is a former chairman of Action Congress of Nigeria (ACN) also waded into the decision by the US government to deny Fayemi entry visa.

He said Fayemi was denied the USA visa like hundreds of thousands of other Nigerians, adding that what happened to the governor was just the beginning.

“So you want to be the next Nigerian Vice President? He quizzed. “You as a person from the South West – through your in-action you may have endorsed the ongoing insults by the Cabal on VP Pst. Prof. Osinbajo, SAN, GCON… and remember he is highly regarded at the White House – so they are sending you and others ‘clear shot across the bow.

“If you do not heed this warning – next – worldwide freezing of you and your friend’s assets,” he said.

He stated that the ‘body bag’ comments by Governor Nasir El-Rufai of Kaduna State has not gone unnoticed by the US and United Kingdom, UK governments.

US ex-president Jimmy Carter taken to hospital after brain bleed