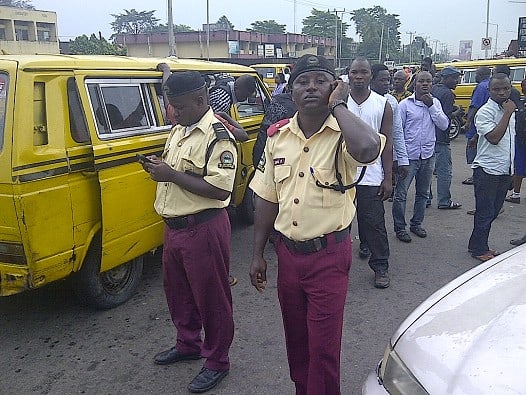 Following an alleged assault one of the Lagos State Traffic Management Authority, LASTMA officers meted out to a commercial bus conductor at Maryland on Saturday; the agency says it will ensure that justice takes its course on all parties concerned.

The General Manager of LASTMA, Mr Olajide Oduyoye, gave the assurance on Sunday in a statement issued by the authority’s Public Relations Officer, Mr Olumide Filade; while reacting to the trending video of the alleged assault.

1st News reports that the  video allegedly showed that  a LASTMA official allegedly assaulting a commercial bus conductor after he had been apprehended.

The statement said, “The attention of the management of the Lagos State Traffic Management Authority (LASTMA) has been drawn to a video trending online; of a LASTMA officer having an altercation with a commercial bus conductor at Maryland, Lagos on Saturday, 7th March, 2020.

“The rules of engagement for the agency officials in relating  with  the members of the public; does not include being physical with traffic offender; as stated in the Law that guides the agency’s operations.

”The circumstances surrounding the video had been investigated thoroughly. It  was discovered that the bus conductor  had contravened the law; by leaving the bus door open while the bus was  on motion.

”Also,  the conductor was also caught hanging  after the agency had  played the  camera recordings of the development.

“Justice will be done on the issue as the driver, the police escort and the conductor had been released owing to public sentiments,” Oduyoye said.

The LASTMA boss noted that both the driver and the conductor of the bus had committed the same offence several times in the past.

According to him, this is the ‘modus operandi’ of this particular bus driver and the conductor by pretending to faint; at the point of being contravened in order to whip up public sympathy against LASTMA officers.

Oduyoye urged road users in Lagos to adhere strictly to the traffic law of the state. This is in order to keep traffic flowing for economic growth and well being of all.

He said that 25 officers of the agency had gone through disciplinary procedure and necessary sanction administered; with some having their appointments terminated since he assumed office in October 2019.

Oduyoye said that concerted effort would be deployed; to apprehend these offenders to face the full wrath of the law.

He implored commuters and the public to refrain from preventing LASTMA officials from carrying out their duties; saying that enforcement was principally meant for their safety and security.