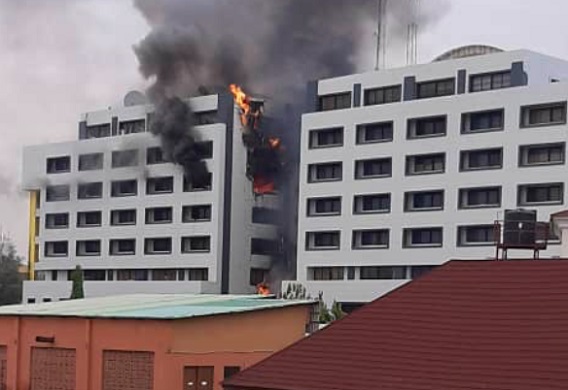 The Treasury House which is the office of the Accountant General of the Federation in the Federal Capital Territory, Abuja, has been engulfed by fire.

1st News gathered the fire started from around the third floor; razing the building upwards including the office of the Accountant General and most of the important offices.

Also, the few firefighters that were at the scene complained about a lack of equipment to effectively tackle the inferno.

Many of the onlookers were seen looking on helplessly as valuables were consumed without let.

More details to be reported as events unfold.

Meanwhile, President of Senate, Ahmad Lawan and Speaker of the House of Representatives, Femi Gbajabiamila made their reservations about the way the Social Investment Programme(SIP) of the Federal Government is being implemented.

This was at a meeting with Minister of Humanitarian Affairs, Disaster Management and Social Development, Sadiya Farouq on Tuesday, April 7.

The meeting was also attended by top officials of the ministry; Deputy Senate President Ovie Omo-Agege, Deputy Speaker Idris Wase and other principal officers as well as members from both Chambers.

The meeting was convened by the leadership of the National Assembly against the backdrop of ongoing Federal Government’s intervention initiatives; aimed at reducing the impact of COVID-19 pandemic on the most vulnerable Nigerians.

Ola Awoniyi, Special Adviser on Media and Publicity to President of Senate in a statement disclosed that Lawan and Gbajabiamila made it abundantly clear; that the SIP needed reform to make it more efficient and effective.

Lawan said the National Assembly was very much interested in the current intervention initiatives of the ministry; particularly with respect to the disbursement; aimed at assuaging the plight of the poorest of the poor Nigerians against COVID-

NLC criticises distribution of palliatives in Lagos, reveals “target recipients yet to be reached”