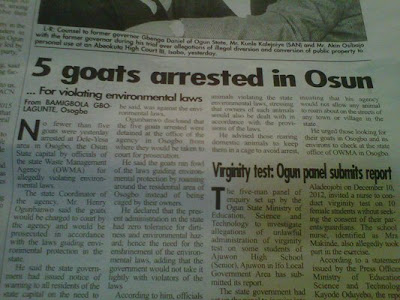 This story appeared in Daily sun today. 5 goats were arrested yesterday at Dele-Yesa area in Osogbo, the Osun State capital by officials of the state Waste Management Agency (OWMA) for allegedly violating environmental laws. The state Coordinator of the agency, Mr. Henry Ogunbanwo said the goats would be charged to court by the agency and would be prosecuted in accordance with the laws guiding environmental protection in the state. Ogunbanwo disclosed that the five goats arrested were detained at the office of the agency in Osogbo from where they would be taken to court for prosecution.

Please go back and read that story again. Are these people alright?