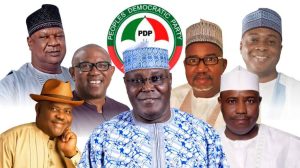 The Peoples Democratic Party (PDP) disqualified two presidential aspirants at the end of their screening on Friday.

The chairman of the presidential screening committee and former Senate President, David Mark, disclosed this to journalists at the “Legacy House” venue of the exercise in Abuja.

The panel had screened 17 aspirants – an exercise which lasted over 10 hours.

While Mr Mark told journalists that two of the 17 aspirants were disqualified, he failed to disclose the identities of the hopefuls.

Mr Mark , however, revealed that the two aspirants were disqualified because “they didn’t meet the requirements.”

When asked how soon the panel will submit its report to the party’s National Working Committee (NWC), the former Senate President simply said: “this night.”

The disqualified aspirants also have the right to appeal to the screening appeal committee set up by the party.

In all, Mr Mark said the panel was satisfied with the standard of the aspirants and whoever “gets the ticket would win the election in 2023.”

He also believes that nothing should stop female aspirants from emerging as flag bearers and presidents.

Part of the screening process is the verification of aspirants’ membership status and other vital credentials.

The party has fixed May 14 for the primary. It has, however, remained silent on its decision on zoning as well as the mode of elections that will be used at the primary.