Skip to content
You are here: Home » NEWS » 161 stranded Nigerians from return from Libya – NEMA 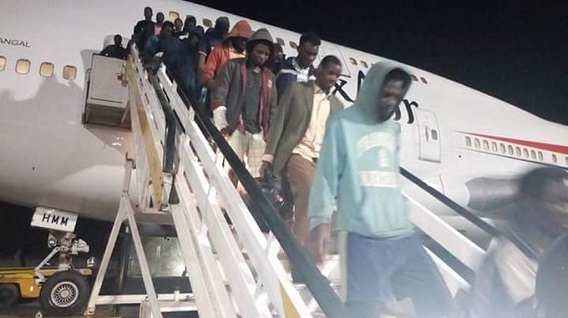 Not less than 161 stranded Nigerians returned from Mtiga in Libya. The National Emergency Management Agency (NEMA) received the batch on Thursday night in Lagos.

Farinloye said that they arrived the Cargo Wing of the Murtala Muhammed International Airport, Lagos; late on Thursday night.

According to him, the returnees arrived via Al Buraq Air Boeing 737 aircraft; with flight number UZ 189 as well as registration number 5A-DMG.

He said that the International Organisation for Migration (IOM); and European Union on the platform of the Assisted Voluntary Returnees (AVR) Programme brought them.

1st News reports that other agencies that received the returnees included the Nigeria Immigration Service (NIS); as well as the National Agency for the Prohibition of Trafficking in Persons (NAPTIP).