Juju music legend, Ebenezer Obey-Fabiyi, has restated his commitment to helping alcoholics and drug-dependent persons on the road to recovery.

Recall that the musician’s son, Olayinka, 48, passed away on Friday, July 31, 2022, and was interred the next day. He was said to have battled alcoholism.

Obey-Fabiyi then; announced the birth of his Freedom from Alcoholism and Drug Addiction Ministry. In furtherance of that objective, the musician announced that will be; starting a ‘Five Minutes Daily Prayers’ session for alcoholics and drug-addicted persons, and their families.

In a statement signed by his General Manager, Tunji Odunmbaku, the music icon expressed gratitude to everyone, especially the General Overseer of the Redeemed Christian Church of God, Pastor Enoch Adeboye; governors, senators, traditional rulers, fellow musicians, clerics, and other well-meaning Nigerians, who condoled him over the unfortunate incident.

The statement read in part, “I sincerely thank you all for your messages. They mean a lot to me and the entire Obey-Fabiyi family. I can’t thank everyone enough for the outpouring of love, concern, and support. It was indeed overwhelming.

“I want to; specially thank Pastor Adeboye, governors, Senators, traditional rulers, fellow musicians, great men of God too numerous to mention, and other well-meaning Nigerians. I pray that God will grant peace to all; grieving parents and victims of alcoholism and; drug addiction all over the world.

Meanwhile, Actress and singer, Angela Okorie, has said she prefers to keep her relationship private because she doesn’t want the unsolicited opinions of third parties.

She said; “Many entertainers, including me, don’t want their relationships out there. I am a very private person and I believe that once the relationship is on social media, it will break.

“That is why many entertainers have ‘social media in-laws’ who tell them what to do in their relationships or marriages.

“I advise people to only go into relationships with people they are comfortable with. It is better to study the person very well (before making a commitment).”

The post Why I pray for drug addicts, alcoholics – Ebenezer Obey appeared first on 1st for Credible News.

Reactions as Groovy breaks up with Phyna (video) 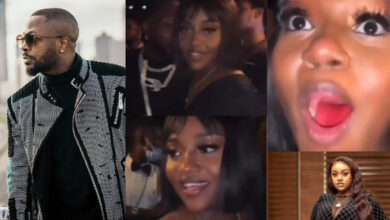