One of the dreams of Nigerian singer, Oluwatobiloba Anidugbe, popularly known as Kizz Daniel, has finally come true.

Naija News reports that Kizz Daniel in the wake of his trending song ‘Buga’ expressed his desire to perform at the 2022 FIFA World Cup in Qatar.

However, the ‘Mama’ crooner on Wednesday night, November 23, 2022, took to the stage in Qatar to thrill football fans with some of his hit songs.

In the videos which surfaced online, the singer’s fans were captured singing along with him and dancing in excitement.

Meanwhile, the Actors Guild of Nigeria (AGN) has conducted a fresh election ushering in Ejezie Emeka Rollas for a second tenure as its National President for the next three years.

According to reports, the new leadership was re-elected on Tuesday at the end of the 2022 Nollywood Actor Summit of the guild held in Benin City, Edo.

Emeka polled 115 affirmative votes from about 120 delegates from 20 states against four nays to retain his position just as Abubakar Yakubu Salisu got 120 ‘yes’ votes against one nay vote to return as National Secretary.

The election was supervised by NEC Chairman, Steve Eboh, and Emma Ogugua, Chairman, the Board of Trustees of the guild.

“Did she pump it more?” – Reactions As Nancy Isime’s Backside Raises Eyebrows

Wike Isn’t Asking For Too Much 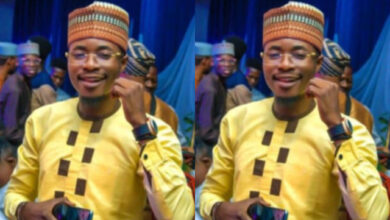